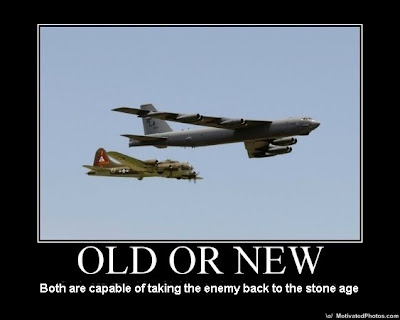 The Navy, then and now… For better or worse…
Then – If you smoked, you had an ashtray on your desk.
Now – If you smoke, you get sent outside and treated like a leper, if you’re lucky.

Then – Mail took weeks to come to the ship.
Now – Every time you get near land, there’s a mob topside to see if their cell phones work.

Then – You wore bellbottoms everywhere on the ship.
Now – Bellbottoms are gone and 14 year-old girls wear them everywhere.

Then – You wore a Dixie cup all day, with every uniform.
Now – It’s not required and you have a choice of different hats..

Then – If you said “damn,” people knew you were annoyed and avoided you.
Now – If you say “damn” you’d better be talking about a hydroelectric plant.

Then -The Ships Office yeoman had a typewriter on his desk for doing daily reports (And you only did them ONCE).
Now – Everyone has a computer with Internet access and they wonder why no work is getting done.

Then – We painted pictures of pretty girls on airplanes to remind us of home.
Now – We put the real thing in the cockpit.

Then – Your girlfriend was at home, praying you would return alive.
Now – She is on the same ship, praying your condom worked.

Then – If you got drunk off duty, your buddies would take you back to the ship so you could sleep it off (and if you were lucky, it would even be the RIGHT ship).
Now – If you get drunk off duty, they slap you in rehab and ruin your career.

Then – Canteens were made out of steel and you could heat coffee or hot chocolate in them.
Now – Canteens are made of plastic, you can’t heat them because they’ll melt, and anything inside always tastes like plastic.

Then – Medals were awarded to heroes who saved lives at the risk of their own.
Now – Medals are awarded to people who show up for work most of the time.

Then – You slept in a barracks, like a soldier.
Now – You sleep in a dormitory, like a college kid.

Then – You ate in a Mess Hall or Galley. It was free and you could have all the food you wanted (and it really wasn’t bad).
Now – You eat in a Dining Facility. Every slice of bread or pat of butter costs, and you can only have one (and it’s pretty bad).

Then – If you wanted to relax, you went to the Rec Center , played pool, smoked and drank beer.
Now -You go to the Community Center and can still play pool, maybe.

Then – If you wanted a quarter beer and conversation, you could go to the Chief’s or Officers’ Club.
Now – The beer will cost you three dollars and someone is watching to see how much you drink.

Then – The Exchange had bargains for sailors who didn’t make much money.
Now – You can get better merchandise and cheaper at Wal-Mart.

Then – If an Admiral wanted to make a presentation, he scribbled down some notes and a YN spent an hour preparing a bunch of charts.
Now – The Admiral has his entire staff spending days preparing a Power Point presentation.

A Great Quote From A Sailor:

“I take exception to everyone saying that Bernanke, Obama, Reid and
Pelosi are spending like drunken sailors.. When I was a drunken
sailor, I quit spending when I ran out of money.”