Am I a sick sumbitch for thinking it is hilarious watching “Petrified” Pelosi swingin’ in the wind??? I REALLY want them to hold those so called “truth” hearings, I REALLY want to see her and a few others up there under oath…

I loved the fact that “Pinhead” Pineta put out a memo over at Christians In Action today telling everyone just to “ignore” the furor, don’t worry about responding and keep on working…

Anyhoo…
The US troops in Afghanistan proved they, like all military, still have a sense of humor; one of them sent this.

“YOU MAY BE TALIBAN IF…”

1. You refine heroin for a living, but you have a moral objection to beer.

3. You have more wives than teeth.

4. You wipe your butt with your bare hand, but consider bacon “unclean.”

5. You think vests come in two styles: bullet-proof and suicide.

6. You can’t think of anyone you haven’t declared Jihad against.

7. You consider television dangerous, but routinely carry explosives in your clothing.

8. You were amazed to discover that cell phones have uses other than setting off roadside bombs.

9. You have nothing against women and think every man should own at least one.

10. You believe it is OK to stone a woman to death for merely being accused of adultery but considered it normal for you to rape and behead women of villages you take over.

11. You’ve always had a crush on your neighbor’s goat.

And another reminder for Memorial Day! 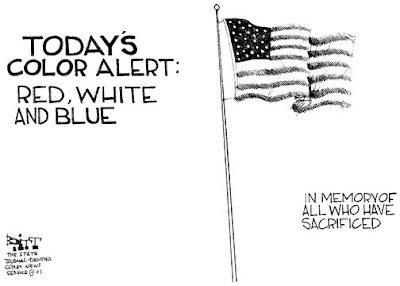