Democrats, realizing the huge success of the President’s “Cash For Clunkers” rebate program, have cancelled CFC and revamped a major portion of their National Health Care Plan.

President Obama, Speaker Pelosi, and Sen. Reid are expected to make this major announcement at a joint news conference later this week. I have obtained a advanced copy of the proposal which is named….

Couples wishing to access health care funds in order to pay for the delivery of a child will be required to turn in one old person for each child they conceive. The amount the government grants them will be fixed according to a sliding scale. Older and more prescription dependent codgers will garner the highest amounts, while younger healthier codgers will earn them less.

Basically you get $3500 toward your hospital bill for a ‘codger’ over 65 but less than 75 that is in relatively good health. You get $4500 for all ‘codgers’ over 75 and more on a sliding scale if they are dependent care.

Special “Bonus Money” will be paid for those submitting codgers from 55 yrs of age to 65 yrs of age in targeted groups such as;

• Smokers (of products taxed and deemed legal by the government)
• Beer/alcohol drinkers (of products taxed and deemed legal by the government)
• Persons 10 pounds over their government prescribed weight
• Any member of any political Party other than Democrat
• Any person ever alleged to have received a “fishy” or sent a false email on the proposed Universal Health Bill under the President’s Internet rat-out-your-neighbor, ‘squealer’ program ([email protected] ) so that an enemies list can be generated
• Any person expressing an interest in transportable health plans, removing state border limitations on insurance policies, introducing tort reform to cut medical cost by reducing defensive medicine testing thereby lowering malpractice insurance costs, requiring congress to actually read all of each bill before they vote on it.

An amendment has been introduced by several Democrat Party congresspersons to add “Tea Party” participants to the list.

All codgers will be immediately rendered totally useless via toxic injection upon submission to the plan. This will insure that they are not secretly resold/reused or that their body parts be harvested to keep other codgers in decent repair.

Of course all registered Democrats, all politicians except Republicans and Libertarians, all political appointees, federal, and Democrat state county and city officials, etc., etc., etc, will be exempt from being defined as a codger by this policy…

And to celebrate, they have redesigned the Pin to be given to all new Doctors for the Hippocratic Oath… 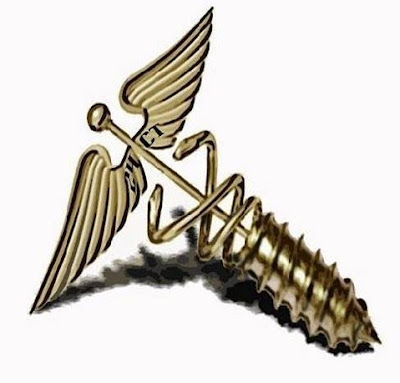 And on a ‘somewhat’ lighter note- From the past comes a VERY appropriate editorial Cartoon…
Any guesses which news paper ran this in April 1934?
Anyone???
Beuhler??? 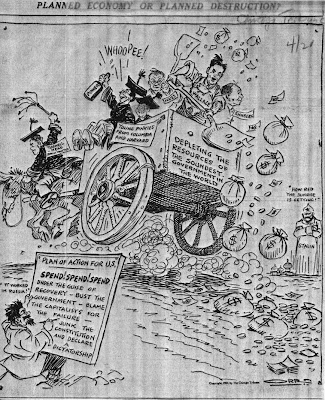 A “Second New Deal” in 1934-35 included the Wagner Act to promote labor unions, the Works Progress Administration (WPA) relief program, the Social Security Act, and new programs to aid tenant farmers and migrant workers. The Supreme Court ruled several programs unconstitutional; however, most were soon replaced, with the exception of the NRA. After 1936, the Fair Labor Standards Act of 1938 was the only major legislation; it set maximum hours and minimum wages for most categories of workers.[3]

The WPA, CCC and other relief programs were shut down during World War II by the Conservative Coalition (i.e., the opponents of the New Deal in Congress); they argued the return of full employment made them superfluous. Many regulations were ended during the wave of deregulation from 1975 to 1989. Several New Deal programs remain active, with some still operating under the original names, including the Federal Deposit Insurance Corporation (FDIC), the Federal Crop Insurance Corporation (FCIC), the Federal Housing Administration (FHA), and the Tennessee Valley Authority (TVA). The largest programs still in existence today are the Social Security System, Securities and Exchange Commission (SEC), and Fannie Mae.

Reference HERE; those who do not learn from the past are doomed to repeat it, and it looks like we are heading down that road…